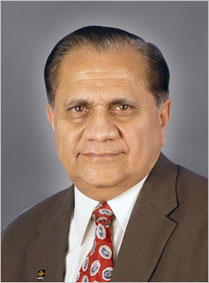 Dr Ramdas Madhav Pai, Chancellor of Manipal University, has a powerful vision for the future: 20 years hence, in a world of shrinking distances and countries with open borders, Manipal India will be recognised as one of the largest global varsities in India.

Dr Ramdas M Pai has always set a high bar for the institutions he has set up. He was awarded the Padma Bhushan by the Government of India in April 2011. Months later, in December 2011, the Government of Melaka, Malaysia honoured him with a ‘Datuk’ Award. He was also awarded the Golden Peacock Lifetime Achievement Award for 2011 in recognition of his contribution in the field of education and healthcare.

With nearly 60 countries already represented in the Manipal campus, he foresees an exponential growth in the international student body, as the university successfully rises to the challenge of a technologically sophisticated era. By continuing to provide excellent physical infrastructure and implementing innovative curricula and learning approaches, he believes, Manipal University will continue to produce pioneers in all fields of medicine to serve the cause of humanity in general. This can-do attitude is a legacy of his father and Manipal’s founder, Dr TMA Pai.

Dr Ramdas M Pai is an alumnus of KMC Manipal and a postgraduate in Hospital Administration from Albert Einstein Medical Center, Philadelphia, USA. In 1961, Dr Ramdas M Pai began his career as a hospital administrator at Kasturba Hospital, Manipal, and built upon his father’s foundation.

He recounts how his father worked with fervour and devotion for what he believed in, even under the most trying circumstances.

The first cardinal rule of life for him is to have a strong belief in whatever he undertakes to do, and then to put all his effort into it, even if it means going it alone. Adversities and the fear of failure are natural, but success comes to those who overcome that fear, he asserts.

He narrates his father’s labour of love in the setting-up years:
“Today there are many educational institutions in the private sector, but my father, the late Dr TMA Pai was the pioneer in the 1950s. ... My father felt that a medical college in Manipal would benefit these students as well as others. The very notion of a private medical college was an object of public ridicule. However, undeterred and true to his innate entrepreneurial talent, he embarked on a mission to obtain land from the Karnataka government to construct a medical college, as well as permission to use the government hospitals at Mangalore for teaching purposes, and was successful on both counts. He realised that financial assistance from the government would not be forthcoming and relied heavily on the concept of self-financing, through fees paid by the students, for successfully developing the facilities over time. ... He also managed to obtain recognition from the Medical Council of India from the very first graduating class of students and the first successful private medical college in India was born. … As for Manipal, over a period of time additional colleges in dentistry, nursing, pharmacy, engineering etc., were added to the bouquet of offerings and eventually a full-fledged university was born and recognised by the University Grants Commission as such.”

Dr Ramdas M Pai, much like his father, believes that a healthy and educated society is necessary to develop an enlightened civilization. In line with his philosophy, Manipal institutions have always taken responsibility of the community at large – to ensure public health, education and a general sense of well-being.

"…While it would be inappropriate to cite a particular instance or an example, suffice it to say that our involvement with the community permeates to the deepest level, whether it be provision of education for the underprivileged through scholarships or the provision of health care to the most needy and downtrodden members of the society or for the provision of gainful employment to the local population. On a personal level, I feel a great sense of satisfaction, that over the many years, our family has had a role in impacting positively, the lives of people near and far, and in many ways,” he says.

Having spent his entire life working with and for the Manipal group of institutions, Dr Ramdas M Pai views his home and workplace as extensions of each other, and believes the staff and faculty at the institutions are members of his extended family.

Feeling completely at home and relaxed even when he is at work actually increases his productivity, he says. He also likes to be part of the social events that occur frequently on campus – these are relaxing and provide him with the opportunity to meet with staff and faculty, which would not have been possible ordinarily.

A sports enthusiast, cricket remains his favourite sport, and he relishes the keen competitive edge of international cricket and the action of the Indian boys in blue.