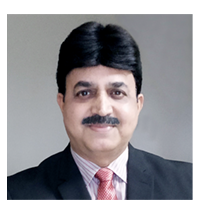 Professor (Dr) Muralidhar V Pai is an alumnus of Kasturba Medical College Manipal. He completed his MD in Obstetrics & Gynecology with Distinction in 1989, DGO in 1988 both from KMC, Manipal and MBBS (1985) from KMC, Hubli. His pre MBBS education was at Thirthahalli, Shimoga District.

Brief Background: Professor Pai joined KMC, Manipal as faculty in the Dept of OBG in July 1989 and ever since he has been serving Manipal group of institutions in different capacities. He served as founder Medical Superintendent of Central Referral Hospital Sikkim (1997), Dy Director Planning MAHE (1997-2000), Professor and Head, Dept of OBG, MMMC, Malaysia campus (2000-02 and 2004-07), Professor & Unit Head Dept of OBG, KMC Manipal (2007-2016) and Head of the Department (May 2016 - April 2021). Professor Pai has been an examiner for MBBS, DGO, MD/MS (Ob/Gyn), DNB (OBG), FNB & MCH (Reproductive Medicine and Surgery) and PhD since 1993 at National and International Universities.

Memberships: Professor Pai is a member of PG CBME Curriculum Development Committee of Rajiv Gandhi University of Health Sciences Karnataka, Member of Board of Studies SRIHER Chennai and former Chairman of Board of Studies - Obstetrics & Gynecology MAHE (2016-21).

Editorial boards: Professor Pai is the National corresponding Editor and Jury of Journal of OBG of India and continues to be the reviewer of it and several other Journals in Obstetrics & Gynecology. Professor Pai has authored 4th edition of Holland & Brews Manual of Obstetrics and 1st edition of Textbook of Obstetrics & Gynecology and published more than 179 articles in peer reviewed journals. He is a popular speaker at National and International Conferences/CMEs and has delivered more than 530 Guest lectures.

Committee’s & Social Activities: Besides academics he has keen interest in cultural and literary activities and was the Chairman of Cultural Coordination Committee of MAHE (2010-15). He was the Chief Warden at MMMC Melaka campus, Malaysia (2004-07) and Warden of PG Hostels MAHE (1995-1997)

Family Tree: Professor Pai is married to Dr Keerthilatha M Pai who is currently the Dean of Manipal College of Dental Sciences, Manipal and his daughter Dr Meghna A Nayak, also an Obstetrician & Gynecologist and Reproductive Medicine Specialist is currently in the UK, married to Dr Arvind K Nayak, Urologist who is pursuing Fellowship in Robotic Surgery, Lister Hospital, Stevenage, UK